I’ve just finished reading Philip Pullman’s new(ish) book, ‘The Book of Dust’. It’s the first part of his ‘Belle Sauvage’ trilogy, and seems to be a prequel to Northern Light, which I guess I read about 10 years ago and still remember the thrill. Especially engaging was the fact that every human character has a daemon – a little animal which is part of you, a constant companion, which accompanies you through all the joys and sorrows of life. 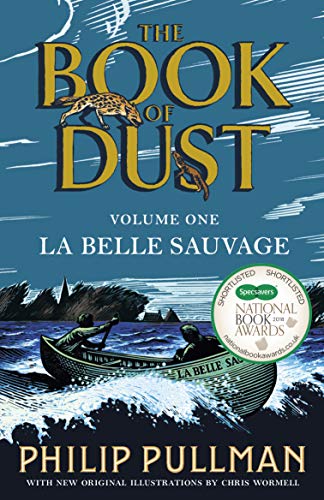 One of the most immediately-attractive things about this book is that it has pictures in it. Lovely black and white illustrations, which took me straight back to the 10-year-old delights of Swallows and Amazons and all the other Arthur Ransomes. Drawings are so evocative; spread through the text, they seem to give you a breather, help you visualise what you are reading and check your understanding. And in their own right they are so downright enjoyable. After half a page of ‘Dust’, I was hooked.

I remember however being encouraged to read books without illustrations – pictures were for babies – you were a big girl, or a clever girl, when you could read a whole book without pictures. What a shame. Nowadays we’re all so much more visually aware so I hope for lots more illustrations in my reading materials henceforth.

The hero of this book is 11-year-old Malcolm Polstead, who lives with his parents in an inn on the Thames near Oxford. His mother serves up big hearty plates of old-fashioned food as bar suppers, and to Malcolm at the kitchen table. Steak and Kidney Pudding. Cauliflower Cheese. Rhubarb and Custard. When Malcolm has to endure some pretty gruelling experiences in protecting Lyra from the nasty Child Protection people, it’s the memory of his mother’s cooking that makes him homesick. And sustains him for the perilous journey. Well done, Mrs Polstead. I’m with you.

I’ve just written a book of food memories, entitled ‘A Life in Mouthfuls’, and am teetering towards self-publication. I asked a couple of people to read it and give me an endorsement for the back cover, and here’s some of what I’ve got back so far:

“… brought back happy memories of my own where various meals were associated with family members who are no longer with us. I remember a great aunt who always served us lunch of ‘toad in the hole’. My Grandmother had a particularly good recipe for beef olives!”

“… beautifully reflects what happens around our own kitchen tables, where people come together for company, conversation and peer support.”

Very happy to have evoked some of what Philip Pullman has evoked for me. Will keep you posted re my book! Have a nice dinner tonight.

It’s that time of year again. Hardly anything homegrown in the shops yet, so we’re still dependent on stuff we have stored away, or foreign imports. I’ve been given some lovely little foodie gifts while I’ve been stuck in with my sore foot – smoked salmon, shortbread, oatcakes, homemade sauerkraut – and last week, a gorgeous jar of pesto, using the wild garlic which grows abundantly round here. So, not to be left out entirely, we set off yesterday to Ingin Brae, and the Troubadour got us our own nice supply while I sat in the car with the window open and breathed in the aromatic pungency.

Last night I used the gifted, prepared pesto in a recipe which Mary Berry demonstrated on TV last week. I don’t often watch her programmes but I’m always on the lookout for a veggie sausage roll, and she had what looked like a good one. So I adapted it, and really you don’t need a detailed recipe. Just mix some chopped, roasted red peppers with a few tablespoons of ricotta cheese and a little less of a strong hard cheese like parmesan. At this point, Mary Berry added basil – I used the pesto instead. Give it a good mix. You don’t want it too soft. Meantime you will have heated your oven to HOT and rolled out a packet of ready-made puff pastry. Cut your pastry into long 4″ wide strips, and pipe or spoon the pepper/cheese mixture down the length of the strips. Beat an egg and paint one edge of the pastry strips. Roll over and seal in the mixture, and pinch the edges to keep it from leaking. Paint the tops with the rest of the beaten egg, chill for 25 mins and bake for same. They were very good indeed and were scoffed before I remembered to take their photo – sorry!

Last year I preserved some lemons (in a Kilner jar with loads of sea salt, extremely straightforward) but I hadn’t used them as I wasn’t sure how to. Hugh Fearnley Whittingstall came to my rescue as usual with a recipe for a spicy potato soup. This involved onions and potatoes, garlic, chilli, coriander and cumin, smoked paprika, and a spoonful of preserved lemon. In other words, a brilliant austerity recipe and it tastes fantastic. The preserved lemon imparts a salty, bitter flavour and melds beautifully with the spices. Just the usual method – chop the onions and sweat them for a while then add everything else, including a litre or so of water. HFW recommends cutting the potatoes into large chunks for the cooking, and removing them before blending the soup – because blenders ma

ke cooked potatoes go gluey. Then mash or rice them and stir back into the soup. Delicious. HFW also has a delightful-looking recipe for roast lamb breast rolled around a stuffing featuring preserved lemons – sort of middle-eastern in its inspiration, and perfect for Easter – not sure if I’m going to be able to get hold of the right cut of lamb but will try, in honour of the Wunderkind and his lovely fiancé coming home for the weekend.

I haven’t, in the past, made much use of roasted red peppers in a jar, but have decided

they are probably a good buy. So I have half a jar left from my veggie ‘sausage’ rolls, and am going to use them to make Roasted Red Pepper Hummus – follow the link for the full recipe. Interesting to see that there is no oil in the recipe, just an optional drizzle at time of serving. I’m not one for cutting out all fats from an otherwise healthy diet, but will be intrigued to see how this works out. I’m guessing the flavour and moisture of the peppers substitutes for the unctuosity (!) of the oil.

Finally – I have won second prize in a national competition for the first draft of my foodie memoir ‘A Life in Mouthfuls’ – so am busily editing and looking into printing costs, cover design etc. Hopefully will be looking to publish later in the year. Exciting!