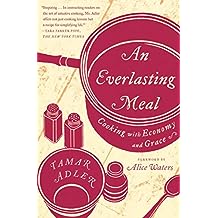 ast year at a little independent bookshop in Cupar, I picked up an intriguing paperback which was far too expensive for the quality of the paper it was printed on, but which nevertheless called out my name. Tamar Adler’s book, ‘An Everlasting Meal: cooking with economy and grace’ has a foreword by Alice Waters, who set up the famous Chez Panisse restaurant in California. I say ‘famous’ meaning, ‘even here across the oceans; even when there is no international chain of Chez Panisse restaurants; and even with completely different food traditions.’ And personally, even though I’ve never been to California and more than likely never will (but one can dream). Waters says Adler is not just teaching people how to cook, ‘but how to love to cook’.

Tamar Adler apparently drifted into Chez Panisse one day and stayed for many years. Her book title completely reflects what she offers – a beautiful, kind, committed lesson on how to make nice food every day and be kind to your pocket as well as the planet. Just what I want. So I’ve read and re-read her book, and learned loads. Most valuable of all is her rejection of the ‘tyranny’ of the idea that veg must always be cooked to order and served hot. Under her guidance, I now cook most of my veg when I buy it, at the weekend, and store it in the fridge. It’s then so quick and easy to put something nice and tasty and healthy on the table at tea-time, when I’m hungry but can’t be bothered peeling and chopping.

However she acknowledges that sometimes other people do things better than she can. Here’s what she has to say about bread making: ‘If you’re going to choose a food not to make at home, choosing bread represents a judicious division of labour. Bakers are devout and singular people, with firm beliefs in the secret lives of the yeast starters they tend. Their ovens are hot, and they can smell when bread is nearly done, then done. I am not devout and singular enough … ‘

Well  I think that probably also applies to me; but every so often I take a notion to bake bread. And this year I’d been wondering about sourdough, as our research project at Uni involved fermentation of waste bakery products. So I bought another expensive book, this time by Sandor Katz, on the art of fermentation. And what does he tell me? ‘You can’t learn about fermentation by reading a book’… He reckons you need to get your hands dirty.

Meantime I had the joy of an invitation to meet with Eric Milne, the owner and director of the marvellous Fisher and Donaldson’s bakery in Cupar. Fisher and Donaldson’s is one of those oralgasm sort of bakeries, you know the sort. Five generations in the same family and causing mayhem in the female population ever since. The (secondary) purpose of my visit was to discuss bakery waste for my aforementioned research project, and it was great to see round the factory and marvel at the dinkiness of the wee round Highlander shortbreads, no bigger than a 10p piece; and the modest symmetry of the pie shells, all queueing up shyly for their share of the juicy fillings. As I was leaving, Eric gave me a bag of broken oatcakes and a sourdough baguette, to take to Uni for our discussions. I will tell you more about the research project in future posts – it will probably be taking over my life to a large extent, any time now. However I’m just explaining to you the way that sourdough has begun to ooze its way into my life, more or less unbidden.

So – yesterday morning I was gifted a tub of sourdough starter, neatly labelled ‘Jimbo: Oct 2014 to Feb 2018’. I think the giver of Jimbo probably meets Tamar Adler’s description of ‘singular and devout’. He is a craftsman in wood, and last week gave us a lovely housewarming gift – a beautiful door wedge, which is far too tactile to be allowed to lie on the floor holding a door open. He told me I had to leave Jimbo out all day, to start the breadmaking process at night. And this is what I’ve been doing. 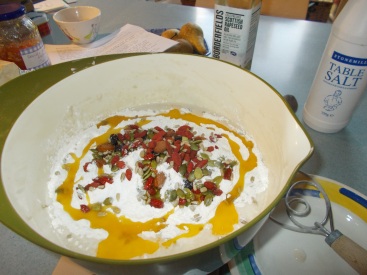 The picture shows it after its first slow rise, with a nice puddle of rapeseed oil and a dose of nuts and seeds ready to be stirred in. The Troubadour bought some strong flour for me at the Co-Op, and I think this may be a bit of a come-down for Jimbo who is used to the finest organic flours from the Pillars of Hercules. But I wasn’t going anywhere near Falkland and as usual was in too much of a hurry (Tamar Adler would say my bread is doomed).

So … the dough is now sitting in bread tins for its final rise but I have a little problem regarding the timing of the baking. In

other words, I’m going out at just the time the bread should be going in the oven. So I’m going back downstairs now to have a poke at it and decide how to handle this crust crisis. I will report back faithfully and am ready to eat humble pie as there is a fair risk that poor old Jimbo’s first outing is going to end in disappointment!