Woohoo! that’s the first Seville marmalade of the season made! For a few hours last night the whole house smelt of oranges, a happy scent that makes me feel like summer – even though the orange harvest takes place in winter. It makes me want to visit Seville, but I don’t know when would be best – blossom time or fruit time? How to choose? I once had a lovely new years’ holiday in Majorca and we took the little wooden railway over the mountain from Palma to Soller. Along the route were orchard-loads of orange trees, all 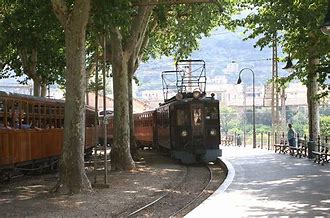 drooping like they were festooned with Chinese lanterns. You could have reached out and plucked them. The scene was so soporific that perversely, I was inspired to think up a plot for a murder novel, with a body being heaved off the rattling guards-van in the middle of a tunnel. I scribbled away at it for a while but plotting has never been my strength, and the energy fizzled out like flat tonic in gin. I should have stuck with a short story. Maybe I’ll revisit it now that I’ve reinspired myself with my marmalade.

Apparently of course, Soller oranges are not the same as Sevilles, and their marmalade is a sweeter cousin. Sevilles are bitter, and so is my marmalade, in a thoroughly enticing and nuanced way. I used Shirley Spear’s method, from her ‘Marmalade Bible‘ – one of a series of pocket-sized books on various aspects of Scottish cooking, published by Birlinn and illustrated handsomely by cartoonist Bob Dewar.

I deviated a little from the recipe – she suggests adding a couple of lemons to your kilo of Sevilles, but I didn’t have any, so pressed on regardless.

I halved the amount of sugar –

partly because I didn’t have enough white sugar and thought brown might discolour or cloud the finished result; and partly because, well as we all know, sugar – teeth – obesity. I can’t do it. Even so, it was a kilo of sugar to the kilo of fruit so it’s hardly a low-sugar option. To counteract this I didn’t top up the juice after boiling, so that the volume was lower. However I still used all the peel, thinly sliced by hand. So the result is three large jars of marmalade, bitter as it should be, packed with softly chewy slivers of peel. We love it.

A word about the book’s author. Shirley Spear is my idea of a really helpful food writer – traditional and to the point but clear in her instructions. Unlike some Scottish food writers, she doesn’t rhapsodise endlessly about pheasant and scallops when most Scots never see these things – although she does give the luxury end of things a good airing from time to time, and is well placed to do so. She reminds us of simple pleasures and traditions which are at risk of dying out. Recently for example she wrote about liver, and posed the question, ‘when did we all get so squeamish about offal?’  I was saddened the other week to read her swansong in the Sunday Herald; although I applaud her life choice. Her career has no doubt been exciting and rewardin

g, but you can have enough of a good thing and grandweans are to be treasured. Shirley Spear, I salute you and wish you well; but I’m missing you already!

Bob Dewar‘s cartoons are clear and informative and a little quirky. They complement the recipes beautifully and turn these wee Birlinn books into a total pleasure. Most of us have more recipes than we will ever need; it’s good that some of the space is given up to really clever, neat and apposite illustrations. More lavish cookbooks have endless gorgeous photos of course, and I do like them too, up to a point. But these wee books  are somehow a bit special. I also have the ones on Berries (Sue Lawrence) and Arbroath Smokies (Iain Spink), and I’m sure I’ll accumulate more as I come across them. They’re practical and also pretty; what more do you want for a fiver?

5 thoughts on “A Jarful of Sunshine”