Well my lemon and coconut cake didn’t seem to kill anybody. It was widely described as ‘moist’, but in all truth I found it a bit greasy.  And the lack of sugar may have been worthy but it wasn’t what I’d call delicious. Which seems a shame – just as I thought I was teaching my taste buds to eschew the rooth-rot stuff.

I had a very quiet birthday yesterday, occasioned by, I’m sorry to say, more of the tooth-rot. An emergency extraction, to be precise. So I had to cancel my plans and slope around the house in my pyjamas and slippers (direct link between pyjamas and toothache/brain receptors). I made a pot of egg and lemon soup – Avoglemono 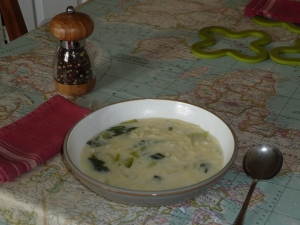 according to Claudia Roden – and it was absolutely fabulous and very restoring. It’s one of those things I’ve been intending to make for years. The egg and lemon mix thickens the broth – and how! I was amazed at how rich and creamy it all went, almost instantly, and with no hint of curdling. And the taste was great – sharp and fresh but very comforting. So that’s a definite new addition to my repertoire. I urge you to try it, it’s very easy. I used the instructions in my Claudia Roden Mediterranean Cookery book, but here’s a different link – it’s all the same process. (See the nice pepper mill in the picture? That’s my birthday present from my friend Grace. It has a lifetime guarantee so here’s hoping.)

I also made a coffee and walnut cake last night. I’m brushing up my 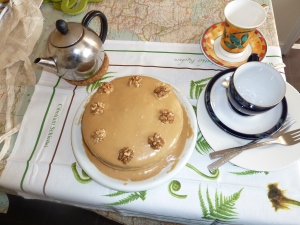 baking because I have just started a wee, part-time, occasional job cooking for four old guys in a very sheltered housing complex. I don’t know if they’ll like coffee and walnut cake – might get stuck in their teeth – but it’s all just variations on a theme. This one is going with me to  Jess’s – she, Shirley and I going for our regular-as-broken-clockwork Thursday swim. Of course we need cake afterwards and so far we all have sufficient teeth to do the job. And in case you think I’ve deserted the literary world for food food food, we’ll also be looking at the Edinburgh Fringe programme to identify a few good events. More of that later.

Tonight is story-to-film night (I’ll explain later) and it’s my turn to make the cake. I wanted 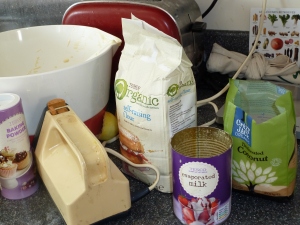 to make something nice and summery, and remembered Delia Smith’s classic lime and coconut recipes from way back. However when I Googled them, her updated recipe calls for coconut powder and I wasn’t sure I’d be able to get it locally. So I searched on and found two recipes which looked good – one from BBC and one from a proprietary brand of evaporated milk, yes Carnation of course, is there any other brand of same?

I took the two recipes with me to a lovely concert on Fri night at Dunfermline Abbey – Cappella Nova doing a formidably-well researched and executed rendition of mediaeval music about Robert the Bruce (start of Bruce Festival in Dunfermline). My friend Shirley is my culinary guru and she thought both recipes were feasible, with no hidden shocks. Then I took them to Glasgow yesterday for lunch with my friend Grace, who favoured the more elaborate of the two. So when I got off the bus last night I called in at the supermarket before going home to collect the requisite ingredients – limes, creamed coconut, dessicated coconut.

Alas, no limes. And further alas, no creamed coconut either – apparently it’s discontinued – why? Must enquire. Anyway I consulted the recipes again and decided to do the simpler one, with lemon instead of lime, as it didn’t call for creamed coconut. So much for choosing a nice seasonal cake, I bet Delia Smith never has this problem.

When I got to making it this afternoon I thought I might have copied it down wrongly because it contains NO SUGAR – apart from the icing on top. So I double checked and sure enough, this is a sugar-free cake. I thought there might be sugar added to both the 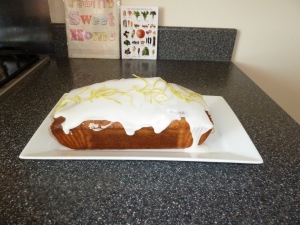 dessicated coconut and the evaporated milk – but there wasn’t.  So let’s hope it goes down okay.  Our little group of friends have all been reading ‘Heart of Darkness’ by Joseph Conrad and will tonight be watching the film of the story – ‘Apocalypse Now.’ So if the cake’s a disaster I’ll claim it’s Apocalypse Cake, specially created for the occasion. The recipe incidentally was really easy – link provided – and I’ll let you know how it tastes but hope it’s good because it would be an easy addition to my very small and rather rustic cake repertoire.

And I can’t resist adding the famous little Carnation milk poem which was written by a woman who had worked hard in dairies all her life and entered it for a slogan competition:

Carnation milk is best of all,
No tits to pull, no shit to haul;
No buckets to wash, no hay to pitch,
Just poke a hole in the son-of-a-bitch!

Since my recent enjoyable stay in Majorca, I’ve renewed my interest in Mediterranean ways of eating. All that olive oil and fresh veg, it has to be good for you. In fact I helped organise a study tour to Greece a number of years ago, looking at services for older people, and the vibrant health and strength of the octo-and nonagenarians we saw there was certainly convincing.

However, the food miles niggle. Scotland is a wonderful country with a g 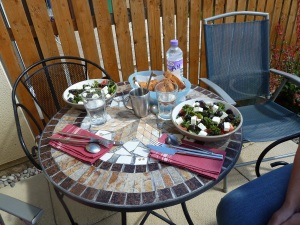 reat climate (okay I’m biased) and excellent farming traditions. But olive groves in Scotland? Nope, haven’t noticed any. Please tell me if you have and I’ll visit immediately. Fields of rape? What, that bright yellow stuff that gives us all hay fever? The stuff you see in every second field from May onwards? Yes, yes, we have lots of rape, and what a shame about its name, it really doesn’t stand a chance of being taken seriously.

Ah but I’m wrong. In recent years a number of rapeseed-oil businesses have grown up and it’s easy to find their produce in the shops – from bog standard ‘oil’ right through the cold-pressed to the extra virgins. And top chefs are supporting it.  I heard an entertaining food programme last year in which Mary Contini and Joanna Blythman were fighting the corner for olive oil against one of the top Scottish chefs and I apologise for having forgotten his name. Anyway, said chef was extolling the virtues of rapeseed oil – far better Omega 3/6 balance, apparently, with lots of other health benefits.   Cate Devine sets out the debate for the Herald, Dec 12.

I have just joined something called ‘The Fife Diet‘ and will come back with more info on that – it suggests we try to get 80% of our diet from local food and 20% from elsewhere. I’m thinking that’s an unfeasibly high target but I might be wrong. Will keep you posted. Meantime, above is a picture of a nice Fifed-up Greek salad I made on Sunday to share with my friend Millie (not her real name but I think it’s best that way!) The Fifing-up may be a claim too far but it’s certainly Scottified, with local purple-sprouting brocolli added to the mix, and rapeseed oil in the dressing.

Following on from the Matzo balls, I have been reminiscing about my working trip to Cluj in Romania in 1995 or thereabouts. I was travelling alone and found that quite difficult because I couldn’t figure out a single word of the language, either written or spoken. This was fairly soon after Ceauscescu had bitten the dust, and the country was very slowly coming out of communism.  When I went on the trams I found people staring at me and then when I tried to make eye contact they instantly looked away. This of course was the country of the Securitate where nobody could trust anybody else because of all the informing that went on.

I was in Cluj as part of a European exchange programme, visiting and teaching at the University. Three nights running I was entertained at the homes of women who were lecturers at the university. Their hospitality was extremely generous and quite illuminating. All three, notwithstanding their high educational standards and facility

in many languages, lived in high-rise flats adorned with grafitti. The dumpling connection comes in here –  one of the colleagues served up some dumplings which I must say didn’t enchant. To my spoiled western palate they seemed heavy and greasy and tasteless. But then she and her husband and children took me out for a drive into the Carpathian mountains and it was wild and beautiful with the possibility of bears – or vampires – to look out for, and it was wonderfully fresh.

I found a charming video on you-tube about making ‘Shliskies‘ – Romanian potato dumplings – do have a look. This recipe looks to me more like Italian gnocchi. However the interesting thing for me is that the man demonstrating the making of the Shliskies to his family is also a holocaust survivor.

One of the other ladies who entertained me that week served a wonderful smoked aubergine pate which I’ll write about next time I make a batch of same.